Alexandria Real Estate Stocks (ARE 2.56%) is now in its 25th year as a publicly traded company and the life science office space pioneer looks set for a stronger performance.

The San Diego-based real estate investment trust (REIT) provides specialty labs and general office space to more than 1,000 tenants in the nearly 75 million square feet it leases in what it calls “locations of innovation clusters” in and around Boston, San Francisco, New York, San Diego, Seattle, suburban Maryland and the Research Triangle of North Carolina.

If you had invested $10,000 in Alexandria during its initial public offering (IPO) in 1997, you would have a total return – that is, growth in capital gains and dividends – of around $160,000. Here is an illustration of the effect that dividend payments have on an investment.

ARE data by YCharts

What have you done for me lately?

It’s not too shabby, but it also doesn’t mean that Alexandria is a world leader in this regard. The chart below shows Alexandria’s total return performance since its IPO in 1997 compared to both the Vanguard Real Estate ETF and the S&P500. 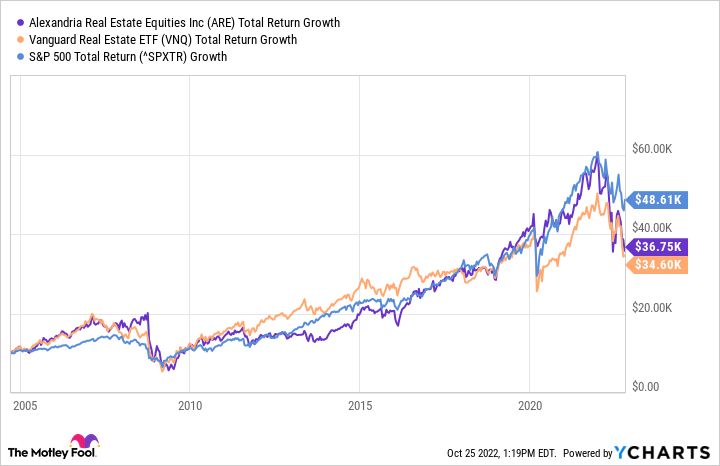 There is an important difference, but there are still plenty of reasons to consider this life sciences trust for a diversified portfolio focused on income and growth. Consider income first. The chart below compares Alexandria’s performance to the benchmark Vanguard Real Estate ETF and Vanguard S&P 500 ETF. Note that the latter was launched in 2010. 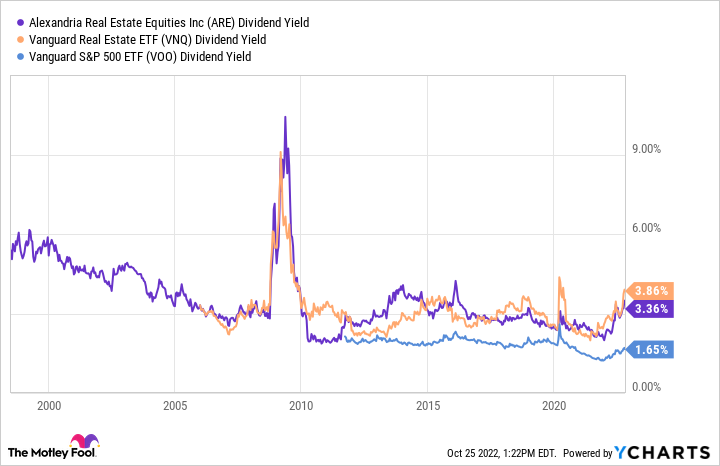 ARE Dividend Yield Data by YCharts

And another chart, this one showing how much the dividend itself has increased over that same 12-year period for Alexandria and those two benchmark stocks. 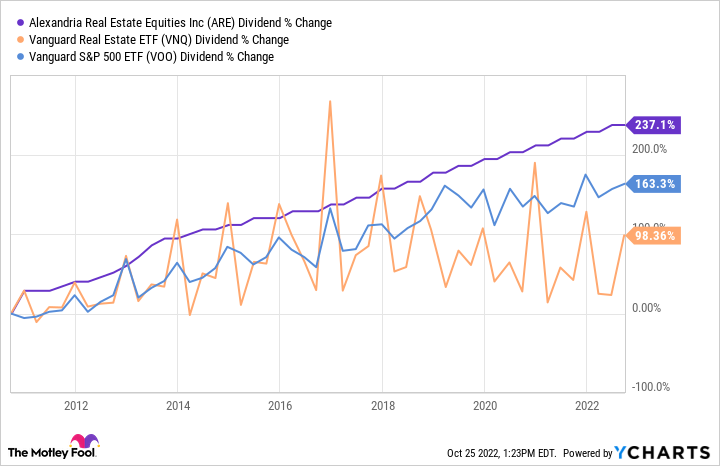 ARE Dividend Data by YCharts

But what are you going to do for me next?

Alexandria’s share price is down about 36% year-to-date. This is a downed stock, but not a downed business. The company grew revenue nearly 25% year-to-date through the third quarter and funds from operations (FFO) per share more than 8% in the same period.

The occupancy rate remains above 94% and October rents and receivables were collected at 99.9% for the 41 million square feet currently in operation. And there’s another 32 million square feet in various stages of construction. The REIT also reports that leasing volume continues to exceed its 10-year quarterly average, with renewals and new leases seeing rate increases of 27.1% and 22.6%, respectively.

Alexandria recently increased its dividend by 5%, continuing an 11-year streak of increased payouts. A modest 56% FFO payout ratio for the third quarter, along with a strong balance sheet, speaks to the sustainability of this dividend and the company’s aggressive expansion plans set the stage for continued revenue growth and split payments.

I own shares of Alexandria Real Estate Equities and am considering adding more before the market turns around again and pushes the stock prices of this office REIT higher.